In 1719 the Schuylkill River became the dividing line between Chester and Philadelphia Counties. Two of the earliest landowners in North Coventry were the families of Martin Urner and Thomas Millard. Urner was a founder of the Coventry Church of the Brethren. The church, on Urner’s property, built about 1724, is the oldest church of that denomination in continuous use in America. A second Church of the Brethren was built in Shenkel Valley in 1828 in the township’s western part. The Millard property contained a mill and a ford. His land is now known as Laurel Locks.

The two oldest dwellings in the township are believed to be the 1713 Shellbark House on Creek Road, in the vicinity of Laurel Locks, and a home on Cherry Lane with exposed logs in the framing.

What makes North Coventry Township unique in Chester County from its earliest beginnings is that it was settled largely by families of German background. The older farmhouses reflect this Germanic heritage. About a third of the taxpayers mentioned in 1718 were residents of North Coventry. Other early families were those of Henry Goode, Michael Haldennan, Ulrich Langacre, Henry Shenkel, Hans Switzer, Jacob Thomas, Abraham Wanger, and Hans Woolf-Miller. In the village of Kenilworth the Swan Stagecoach Inn dates to 1744 or before.

An event of historic proportions occurred in the township in Shenkel Valley between the years 1837 and 1857. A rebellious religious group, never more than 35 members, took hold of a few farm families, including the Stubblebines, in the valley. These were the Battles Axes. So notorious was the sect’s moral code, favoring nudity and cohabitation, that the name Free Love Valley has become synonymous with this area of the township.

In 1855 one of the group’s members, Hannah Shingle (aka Shenkel), was murdered in the second floor bedroom of her farmhouse by her own axe. The perpetrator was never found. Soon after, the group died out. Its leader, Theophilus Gates, died in 1846 and his successor, the self styled prophet, Hannah Williamson, ‘moved west’ in 1857. 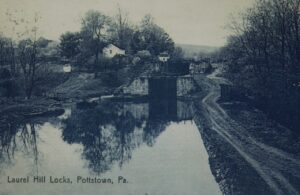 A historical milestone for the township was the opening of the Girard Reach of the Union Canal by the Schuylkill Navigation Company in 1824. Four and a half miles of the Girard Reach past through North Coventry Township. A portion of the canal with a lock remains on the Laurel Locks Farm. In 1831 there were the beginnings of a canal village, known as Pottstown Landing, which took shape along Laurelwood Road at the Schuylkill River, carving lots from the Reiff and Wanger farms. This village is on the National Register of Historic Districts. It is the only village along the canal that owes its development to the canal industry.

During the unsettling period of the mid-1800’s, Rev. John Price who lived with his family at Laurel Locks was pastor of the Coventry Brethren Church. Two buildings in the township are said to be associated with the Underground Railroad movement of the 1850’s: the Jerome Titlow barn at Cedarville Road and South Hanover Street (torn down in 2006) and the John Stubblebine farmhouse on St. Peter’s Road.

In the nineteenth century the township was composed of villages. Three of which had post offices in the 1870’s. The township had blacksmith shops and along the canal were wharfs. Six elementary country schools were in or near the villages, dating back to the 1830’s. The Methodists established two churches in the township, one overlooking Shenkel Valley in 1844 and the other in Cedarville in 1873. The earliest cemetery is that off of Urner Street opening in 1741. In 1808 Shenkel’s Free Burial Ground came into being. In 1873 Zion Cemetery opened at South Hanover and Schuylkill roads. At the time this cemetery served the Coventrys, as well as, Pottstown. In 1889 the local Farmer’s Union established a Grange in Cedarville. Towards the end of the nineteenth century, the demand for industrial workers in Pottstown created a housing growth along the river villages.

North Coventry Township began to change the rural character along major roads. The township’s first high school admitted students in 1912, the school ceased as a high school in 1956 when seven townships consolidated into the Owen J. Roberts School District. In 1964 PennDOT used sections of the canal for a major highway- Route 422. Pottstown Pike, Route 100 was also modernized. In 1967 the first township mall, NORCO or Coventry Mall, was built on the John Halderman farm (once Abraham Wanger’s) on Schuylkill Road at Routes 724 and 100

Email your photo to us with your name and what you know about the photo, time period, location etc.  Email it here

Scroll back to top