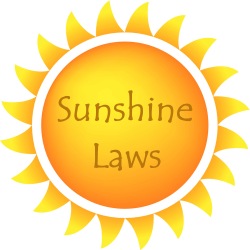 The Pennsylvania Sunshine Act, 65 Pa.C.S. §§ 701-716, requires agencies to deliberate and take official action on agency business in an open and public meeting. It requires that meetings have prior notice, and that the public can attend, participate, and comment before an agency takes that official action.

The Office of Open Records (OOR) does not enforce the Sunshine Act, but it does provide training on the law. Following are answers to the most frequently asked questions the OOR receives regarding the Sunshine Act.

Which agencies are subject to the Sunshine Act?

Any state or local government body and all sub-units appointed by that body that perform an essential government function and exercises authority to take official action. It can include boards, councils, authorities, commissions, and committees. The Sunshine Act defines an “agency” as the “body and all committees thereof that are authorized to render advice or take official action” on behalf of the governing body.

The law defines a meeting as “any prearranged gathering of an agency which is attended or participated in by a quorum of the members of an agency held for the purpose of deliberating agency business or taking official action.”

The law defines agency business as “the framing, preparation, making or enactment of laws, policy or regulations, the creation of liability by contract or otherwise or the adjudication of rights, duties and responsibilities.” Agency business specifically does not include administrative action (i.e., the execution or carrying out of previously approved official action or policies).

What notice must an agency provide prior to public meetings?

For regular public meetings, agencies must provide at least three days advance notice prior to the first regularly scheduled meeting of the calendar year, along with all further scheduled meetings for the remainder of the calendar year. The notice – which must include the date, time, and location of the meetings – must be printed in a newspaper of general circulation and posted at the location(s) where the meetings are to take place.

For a special or rescheduled public meeting, agencies must provide at least twenty-four hours advance notice, with the notice bring printed in a newspaper of general circulation and posted at the location where the meeting is to take place.

Although not required by the Sunshine Act, including the purpose of a meeting, particularly a special meeting, is a good practice followed by many agencies. Some local government statutes, such as the Borough Code, require the subject to be included in special meeting notices (see 8 Pa.C.S. §1006).

Yes. The Sunshine Act gives the public the right to comment on issues “that are or may be before the board.” Agencies must provide a reasonable opportunity for residents and/or taxpayers to comment on an issue before a decision takes place.

Agencies are permitted to establish rules to oversee public comment by, for example, limiting the time for each commenter. The OOR encourages agencies to take care when imposing time limits on public comment. Three minutes is a common limit, and may be more than enough at most public meetings. However, it may not be adequate at certain meetings, such as when a complex draft budget is being discussed. It can be a good practice to allow for flexibility in any policy imposing time limits on public comment, taking care to ensure that the agency does not show partiality to some commenters over others.

Can the public ask questions during the comment period?

Yes. Although members of the agency are not required to provide an answer, it is certainly a good practice to do so whenever possible. Answering questions can demonstrate a commitment to helping constituents and, in many cases, answering questions informally at a public meeting can reduce future requests under the Right-to-Know Law, which saves time and money for both the agency and the commenter / requester.

Can public meetings be recorded?

Yes. The Sunshine Act allows meetings to be recorded with an audio recorder or a video recorder. It also allows agencies to issue rules concerning the use of recording devices in order to avoid any disruptions. However, such rules should not be an attempt to prevent a member of the public from recording a meeting.

Must agencies keep minutes of their public meetings?

Yes. Agencies are required to record the time, date, and place of their meetings; the names of the members present, the substance of all official action taken during the meetings, and a record of how each individual voted. The minutes also must list all members of the public who participated in the meetings and a summary of their comments.

What if a quorum is not present at the public meeting?

An agency cannot legally take official action if they a quorum is not present. A quorum is the minimum number or majority of voting members of an agency that must be present in order for the agency to conduct business. The number of members needed to form a quorum varies by the type of agency involved.

Can an agency have a closed meeting?

An agency may discuss certain matters in Executive Session, which is not held in public. Some reasons an agency may hold an Executive Session include discussing personnel matters; holding an information, strategy and negotiation session related to the negotiation of a collective bargaining agreement; considering the purchase or lease of real property; and consulting with an attorney about active or pending litigation. The specific reason for an Executive Session must be announced in the public meeting either before or directly after the Executive Session. See Reading Eagle Co. v. Council of City of Reading, 627 A.2d 305 (Pa. Cmwlth. 1993), (“[T]he reasons stated by the public agency must be specific, indicating a real, discrete matter”).

Closed gatherings may also beheld “solely for the purpose of collecting information or educating agency members about an issue.” See Smith v. Township of Richmond, 623 Pa. 209, 223 (Pa. 2013) (“[T]he Supervisors’ four closed-door gatherings did not violate the [Sunshine] Act because they were held for informational purposes only and did not involve deliberations”).

What legal remedies are available for violations of the Sunshine Act?

Are there penalties for violating the Sunshine Act?

Yes. In addition to being assessed attorneys’ fees, any member of an agency who is found to have willfully violated the act can face criminal charges and subject to fines of $100 to $1,000 for the first offense, and $500 to $2,000 for the second offense.